There are two new deaths in New Zealand from Covid-19, taking our total toll to 16, director-general of health Ashley Bloomfield revealed this afternoon.

There have been just three new cases in New Zealand, the smallest number so far.

For the fifth straight day there are no new cases in the Southern DHB area, where the total remains at 216.

One of the deaths was Invercargill woman Jocelyn Finlayson, who had been fighting for her life in Dunedin Hospital for two weeks and died overnight.

Her death was confirmed to the Otago Daily Times by her son Will Finlayson, also of Invercargill, this morning.

Mrs Finlayson (62) last left her home on March 17 before going into lockdown with her family in Invercargill.

The family was unsure of how she contracted the virus, Mr Finlayson said.

Dr Bloomfield announced the deaths and new cases today, and said arrangements were made for Mrs Finlayson’s family to be with her last night as she passed away.

Dr Bloomfield apologised to the family after confusion over her status in hospital. 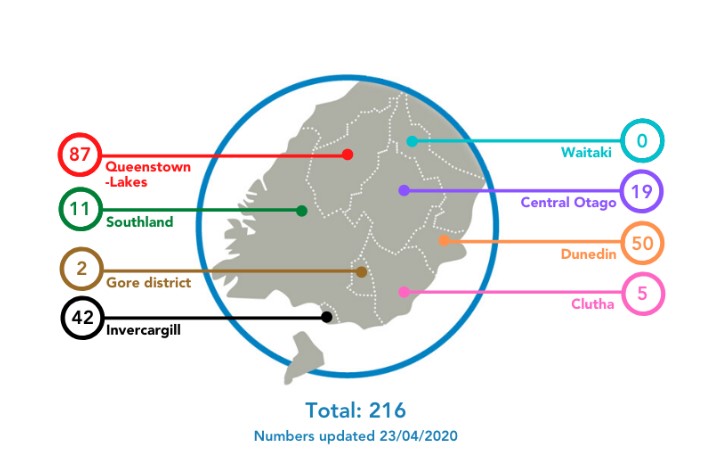 Source: Southern Health
On Tuesday, he said none of the patients in hospital were critical; yesterday he said they were stable  – however, the ministry later clarified that “stable” meant there had been no change in a patient’s condition.

He said he would be willing to talk to the family personally if they desired.

Mrs Finlayson is the second person from Invercargill to die of Covid-19. Alister Peter Brookland, in his 70s, known as Barney, died on Tuesday last week in his Kingswell home.

The second death announced today was a resident of Rosewood rest home in Christchurch, a man in his 70s. There are now nine deaths associated with that cluster.

The man died in the hospital wing of Rosewood, and had not been transferred to Burwood Hospital.

He had an underlying condition, and while he had tested negative for Covid-19, he was treated as a probable case, Dr Bloomfield said.

The deaths take the country’s total to 16.  The number of people who had recovered was 1065.

The new cases comprise two confirmed and one probable case, but the number of total cases remains unchanged at 1451, as three cases announced yesterday were associated with the cruise ship Greg Mortimer and may have been reported first in Uruguay, Dr Bloomfield said.

In a statement this afternoon the Ministry of Health said those three cases had been reclassified as under investigation.

“They are laboratory confirmed cases of Covid-19, but they were possibly already counted in Uruguay’s case total. They have been deducted from our total while this is confirmed, to prevent double counting of the cases by the World Health Organisation.”

There are eight people in hospital with Covid-19, one is in ICU in Middlemore Hospital.

The number of significant clusters remains at 16, and there are four additional cases linked to those clusters. One is linked to the World Hereford Conference in Queenstown and two to the Rosewood rest home.

The ministry said laboratories processed another record number of tests yesterday – 6480 –  and had now processed 101,277 tests in total.

He said dentists will be able to to preform urgent surgeries under Level 3.

Meanwhile, the ministry was doing a stocktake of PPE, and how it’s being rolled out across the country.

On hunting, Ms Ardern said in many parts of the country this is an important part of providing food for families.

She reiterated that hunting is allowed under level 3, if it’s on private land.

“Hunting is an important part of many New Zealanders’ lives,” she said.

Duck hunting season has been pushed out for a couple of weeks.

“I know this will be disappointing for many,” she said.

However it’s important that people keep their social distancing.

Road will be repaired soon: council